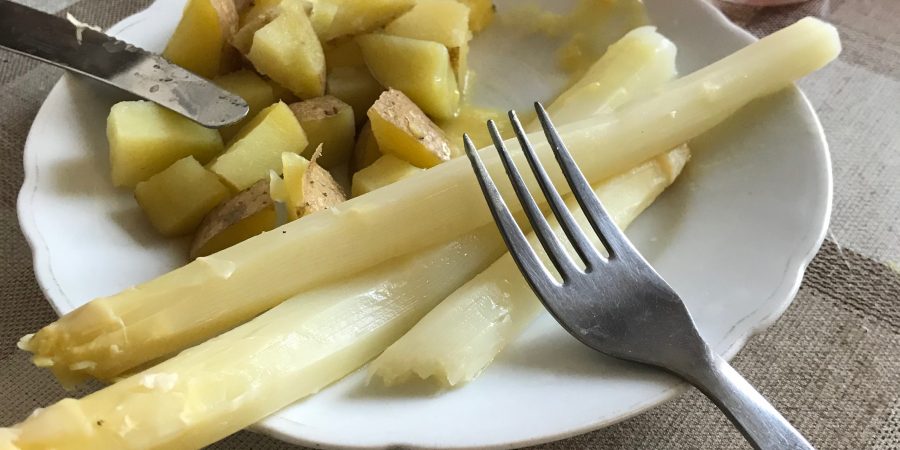 These are the second two weeks of my April challenge: to eat at least one meal with local, seasonal produce. I’ve been in Lower Saxony with my husband’s family the past two weeks. But I’m happy to report that this past week was a flying success!

After seeing information about the limited importance of food miles last week, I thought I’d do a bit more research. So I found a paper by Christopher Weber & H. Scott Matthews in Environmental Science & Technology that calculated the relative climate impacts of food during production and transportation in the United States.

They analyzed emissions by food group, e.g. red meat, other meat, oils/sweets, fruits and vegetables, dairy, and cereals. They found the transportation emissions roughly the same for each food group, between 0.1 and 0.2 metric tons CO2e per household per year for each. This means about 1 ton of the average American household’s 8 tons of total food emissions was for transportation.

However, production emissions of red meat were significantly higher than all others, no matter how they were analyzed. This is tricky: can you compare the emissions from a steak to a head of broccoli? I think the best is carbon dioxide per calorie eaten, as you can directly replace one for the other this way. In these terms, red meat emitted twice as much greenhouse gas as the nearest category, dairy. Non-red meat and fruits and vegetables each had about a 1/3 of red meat’s impact. Cereals and grains were about 15% the impact of red meat, or ½ again fruits and veggies.

So eliminating red meat has a bigger climate impact than eating more local than distant produce.

All month, I’m trying to buy local, seasonal produce at least once a week and prepare it in a way that my family will eat. Last week, I found carrots and potatoes and talking about what’s in season now in Germany.

How I did this week

Success! I bought 1 kilogram (2 pounds) of fresh white asparagus from a local farmer who held a stand a few minutes’ walk from the house every Saturday.

I turned it into traditional German dish: asparagus with boiled potatoes and Hollandaise sauce. The total food miles for the asparagus (i.e. distance from the farm to the stand we bought from): 120 km, about 75 miles; within the “100-mile-diet” radius. We got four meals out of the potatoes, three from the asparagus. The food was great, the meal was vegetarian, and everyone enjoyed it.